How an Aerobic System Works

An aerobic treatment unit or ATU, is a small-scale sewage treatment system. Different than a traditional septic system, the ATU uses the aerobic process for digestion rather than just the anaerobic process used in conventional systems. These systems are commonly found in areas where public sewers are not available and may be used for a single residence or for a small group of homes. Unlike the conventional septic system, the aerobic system produces a high-quality secondary effluent, which can be sterilized and used for surface irrigation. Most aerobic systems have three tanks (the aerobic tank is two compartments connected at the bottom) and an aerobic system should have an access port (riser) to each tank. Some systems do not have a riser to the trash tank, which means that it will be necessary to dig and access the tank when a pump out is required. The images below show a few common riser configurations. 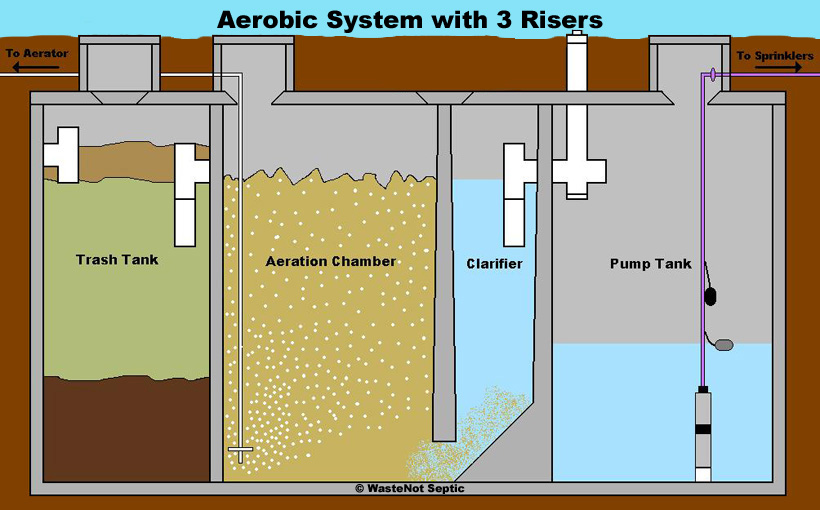 Septic effluent moves out of the trash tank to a separate aeration tank. This tank is made up of two compartments, the aerobic chamber and the clarifier. In the aeration chamber air (oxygen) is pumped through the system to provide oxidation and waste treatment using a variety of designs. The added level of oxygen permits a variety of microbial life forms (bacteria, fungi, protozoa, and others) to oxidize or otherwise process pathogens and nitrogen compounds in the discharged septic effluent. The aerated, or oxygenated wastewater is called the "mixed liquor".

An aerator or air pump, normally installed in a chamber atop or close to the septic tank, pumps air into the septic tanks aeration compartment using any of several methods to aerate the wastewater.
A mixing device or rotor may be used to further agitate the wastewater in the aerobic treatment tank to increase the oxygen level in the effluent and to support treatment by aerobic bacteria in the tank. Speaking slightly more technically, the aerobic process in the treatment tank provides for biochemical oxidation of the soluble organic compounds found in domestic wastewater.

From the clarifier, the treated effluent flows through a disinfection device and into the pump tank. Many different technologies exist for disinfection; however, tablet chlorination and liquid chlorination are the most common. From here, the effluent is collected in the pump tank, where a pump discharges the effluent through an approved disposal system (commonly sprinklers in Texas).